Transport Minister Satisfied With Works At The Sunyani Airport 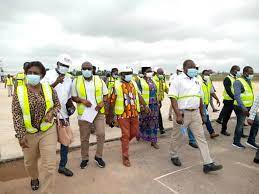 Mr. Kwaku Ofori Asiamah, the Minister of Transport, has inspected on-going rehabilitation and expansion works at the Sunyani Airport and has expressed satisfaction with the progress of work so far.

The Ghana Airport Company Limited (GACL) contractor pegged the progress of work on the facility at 95 percent, expected to be completed and commissioned in May, this year.

Mr Asiamah said the work was in line with the vision of the Government to develop and promote domestic airline services.

The Sunyani Airport was closed down in 2015 due to the poor state of infrastructure and deplorable condition of the runway.

Mr Asiamah expressed discomfort with the level of encroachment around the Airport, and warned encroachers to stay clear of the land or face ejection.

Mr Yaw Kwakwa, the Managing Director of the GACL, later told the Ghana News Agency (GNA) that works on the facility included fixing of fittings and minor works on the terminal building, and expansion and upgrading of the runway.

He said the runway had been extended from 1,280 metres to 1,520 metres, while its width had been broadened to cover 45 metres.