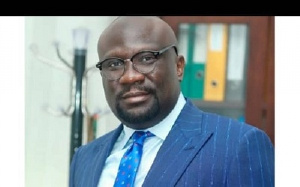 Success stories have been told of many Ministries, Departments and State Agencies under the government of H.E. President Nana Addo Dankwa Akufo-Addo, but the success that has clearly not been told enough is the story of the National Buffer Stock Company (NAFCO) under the competent hands of the current CEO, Abdul Hannan Wahab. This piece therefore seeks to do exactly that.

First of all, the point must be made that the National Food Buffer Stock is an Agency under the Ministry of Agriculture, which was set up in 2010 with the core mandate of preserving state food security reserve; supplying food to state institutions; managing government’s emergency food security; providing secured market for farmers and insulating them against post-harvest losses resulting from spoilage due to poor storage, thereby protecting farm incomes. NAFCO was set up to operate as a limited liability company.

However, since its formation in 2010, the Company (NAFCO) had done very little in pursuance of its core mandate and objectives. Indeed, the company had consistently been making losses upon losses at the end of each financial year, and could not even meet its operational expenses nor pay the salaries of its workers. It could therefore not operate as a limited liability company and for that matter as a non-subvented institution. Ultimately, the taxpayers’ money (i.e. the Consolidated Fund) was used to finance the company and pay its workers.

This ‘sorry state’ of NAFCO continued unabated and was only moving from bad to worse until the year 2017 following a change in government and more significantly, following the appointment of Abdul Hannan Wahad, a renowned Agriculturist as the CEO of the company. Owing to his sterling leadership, the company has, in the past three and half years, had completely different narrative. By dint of hardwork, Abdul Hannan has drastically transformed the fortunes of NAFCO and positioned the Agency as the foremost Food Security Entity not only in Ghana but also in the West African Subregion.

Among other things, the company has also moved from a loss-making entity to a very profitable entity making huge profits annually. The company is able to meets all its operational costs; pay the salaries of all its staffs despite the quadrupling of its strength over the past three years, and is also able to pay (remit) part of its internally generated funds (profits) to the Consolidated Funds to be used by government to finance developmental projects across the country as well as to meet other statutory financial commitments.

Another significant feat chalked by the Abdul Hannan-led NAFCO, is the One-District-One-Warehouse project of this government, which is an initiative of the buffer stock company in collaboration with the Ministry of Special Development Initiative to construct warehouses across the country for purposes of mopping up and preserving excess produce from all farmers in line with its mandate.

This follows the huge success of the Planting for Food and Jobs Initiative which had consistently resulted in bumper harvests thereby making it imperative for a buffer stock mechanism in order to ensure stability in the demand and supply of food and to avoid post-harvest losses. Equally, this initiative, under which a total of 80 warehouses have been fully constructed each with a capacity of 1,000 metric tons with 90 more under various stages of completion, had ensured an all-year-round food supply for local consumption and for exports.

Abdul Hannan-led NAFCO also earns significant foreign exchange for the State by ensuring increased food production affording the country the opportunity to export surplus food items after meeting local food requirements. The company has also succeeded in mopping up the excess food supply which it releases to the market at the appropriate time to ensure a continuous food supply and therefore stabilization of food prices in the country.

Again, the Nation Buffer Stock Company under Abdul Hannan, has become so viable as to be able to wholly absorb the feeding component of government’s flagship Free Senior High School policy, which responsibility, NAFCO has performed creditably contributing to the overall success of the Free SHS policy, through a sustained supply of food commodity to all Senior High Schools across the country. Indeed, it is because of the Hannan-led NAFCO that is why we no longer hear news of closure of schools due to lack of food.

Abdul Hannan has also ensured that the food commodity provided by NAFCO and its suppliers to schools, hospitals, prisons and other relevant government institutions meet the safety and quality test at all times. To this end, he established a monitoring and evaluation unit and employed nutrition/food safety managers who are constantly visiting these institutions to ascertain the quality compliance levels of food items provided under the NAFCO regime.

The Abdul Hannan-led NAFCO has also provided over 4000 direct jobs to its Licensed Buyers and Licensed Suppliers Schemes and over 15,000 indirect jobs for farmers and warehouse workers. Now more than ever, Ghanaian farmers are encouraged to engage in large scale farming knowing very well that NAFCO is always available and ready to absorb their excess produce.

Ultimately, in recognition of his outstanding performance as the CEO of NAFCO, Abdul Hannan has received many deserving national and international awards. The African Business Chamber of Commerce (ABCC) and the West African Regional Magazine (TWARM) have both honored him with the West African Regional Magazine (TWARM) Business & Leadership Award during the 6th Africa-China Business Dialogue in Shanghai, China.

Abdul Hannan Wahab was also honoured as the recipient of the topmost honours during the 2019 Ghana Business Awards when he emerged as the winner of the coveted Business Personality of the Year Award. This was in recognition of his sterling leadership at transforming the almost defunct company into profit-making and more importantly for repositioning NAFCO to perform its core mandates of preserving state food security, providing ready markets for farmers and supplying food to state institutions.