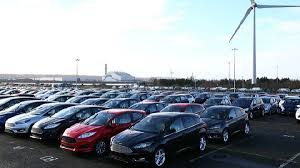 Officials from Suzuki Motor Corporation, Toyota Tsusho Corporation, and CFAO have announced a joint venture to manufacture and distribute vehicles in Ghana.

At a courtesy call on President Akufo-Addo, on Tuesday, 19th March, 2019, at Jubilee House, Mr. Koyote Suzuki, General Manager for the Middle East and Africa of Suzuki Motor Corporation, told President Akufo-Addo that with the company producing some 1.8 million vehicles in India alone, “my mission is to find our next India in the continent of Africa.”

He stated that “our next phase of growth will come from Africa, but we need to find the right partner in Africa for manufacturing and distribution after sale of our vehicles.”

Suzuki, he said, has partnered with Toyota in Africa, and are currently working in some 26 countries.

Mr. Masafumi Yamashita, from Toyota Tsusho Corporation, in his remarks, noted that Toyota Corporation and CFAO have the largest automotive distribution network in Africa, and have an ambition to contribute to and support further development in African countries.

“Our vision is with Africa and for Africa. This time, we commit to work together with Suzuki Motor Corporation for the future development of the automotive industry here in Africa, as a strategic partner,” he added.

On his part, President Akufo-Addo told the gathering that “these three companies that have come together to push an idea, here in Ghana, is an idea that we have to welcome.”

His Government, he explained, is interested in developing a vibrant and dynamic automobile industry in Ghana, and has made several initiatives towards that end.

“Finally, I believe we are now ready to outdoor our automotive policy which will enable people like you know what is available to you in terms of government support, and also the obligations that will be upon you, if you enter the Ghanaian space,” the President added.

With the economy projected to grow by 7.9% this year, and the country recognized as one of the most stable countries on the continent, where the rule of law works, President Akufo-Addo stressed that “this is architecture designed expressly to try and attract investments into our country.”

President Akufo-Addo told the delegation that “you are very welcome, and it will be very good news for the people of Ghana if they were to hear that Suzuki has teamed up with Toyota Tsusho and CFAO to establish a facility here in Ghana.”

With Suzuki manufacturing 1.6 litre engine vehicles in India, the President stated that “these are exactly the kind of cars that should have very successful entry into the Ghanaian market.”

The Second Lady of the Republic of Ghana, HE Hajia Samira Bawumia and a host of other dignitaries who are conscious about youth empowerment and development were hosted by Staff and Management of the Youth Employment Agency. The Agency which is preparing to roll out massive innovative programs that are aimed at curtailing the debilitating unemployment situation affecting the youth in the country has been engaging business owners, SMEs and the corporate world to help realize its initiatives. These initiatives include; the YEA Job Centre: a platform with walk-in centres and training hubs to link job seekers to employers. There is the Artisan Directory which will train artisans in various fields and offer them capital to start up their own businesses. Beneficiaries will be certified and placed on a common platform to sustain and ensure the growth of their businesses. Another initiative is the Regional and District Flagship projects which will seek to create jobs for the Youth in various communities mostly through Agriculture. The Guest of Honour, Second Lady Hajia Samira Bawumia, applauded the governing board and management of the Agency for their commitment to the cause of eradicating youth unemployment. She also expressed readiness to partner and support the Youth Employment Agency on these new initiatives and on their quest to promoting youth development. She urged the other dignitaries who accepted to be ambassadors of the Agency, to push the agenda of job creation with their influence. The Second Lady was emphatic on the need for all hands to come on board to mitigate the social menace of unemployment especially among the youth. Board Chairman of the Youth Employment Agency, Mr. Sammy Awuku and CEO, Lawyer Justin Kodua Frimpong respectively thanked the Second Lady Hajia Samira Bawumia and the other ambassadors for accepting to be part of the vision of the Agency and prayed them for an effective partnership that will lead to development in the lives of the Youth in Ghana. The dignitaries present included Minister of State Hon. Catherine Abelema Afeku, CEO of EIB Group Kwabena Anokye Adisi (Bola Ray), Veteran Actress Jackie Appiah, CEO of MakeUp Ghana Rebecca Donkor, Actress Bibi Bright, and Musicians Kwesi Arthur and Wendy Shay. The meeting was also graced by the CEO of AGI Mr Seth Twum Akwaboah who also pledged his readiness to offer support regarding partnerships with the private sector. Corporate Affairs Directorate, YEA_with Kofi Ofosu Nkansah Board Chairman of YEA champions YEA JOB CENTRE - an innovative hub that train artisans, link them to employers or provide startup capital

The President of the Republic, Nana Addo Dankwa Akufo-Addo, on Wednesday, 20th March, 2019, launched the e-Justice Project, the paperless court system which will enhance dramatically the nation’s efforts at improving its justice delivery system. Speaking at the launch, President Akufo-Addo stated that the e-Justice Project is a recognition of the fact that every aspect of life is today ruled by technology. “The Project is attempting to help ensure that the law keeps pace with technology, ending the age-old “missing dockets” phenomenon and endless litigations, which have plagued the efficient delivery of justice in the country for several years,” he added. President Akufo-Addo told the gathering that since his assumption of office, a number of policy measures have been introduced to help bridge the technology-gap, in the justice delivery system. Thus, it was that, in May 2018, Vice President Dr. Mahamudu Bawumia launched the e-case register. The register contains information such as titles of cases, types of offences, gender of accused persons, contact details of the police station, investigators and attorneys directly involved with a case, amongst others. “When fully executed, information about the number of convicts, dates convicted, nature of offences, number of persons on remand or who are simply being processed for court, amongst others, will be shared with the relevant state institutions,” he said. The President continued, “Through the e-Justice Project, an electronic platform is being provided for process filing, process service, fee assessments, and online payments. The platform, additionally, automatically assigns cases to courts and judges, a clear departure from the days of manual assignments, which had the tendency to pervert the course of justice.” The paperless court system, President Akufo-Addo explained, “operates with minimal interference, and, if what we have seen so far with the paperless system in use at our ports is anything to go by, then we are guaranteed greater efficiency in our justice delivery system.” He urged the Chief Justice not to relent in her quest to build a first-class Judiciary, whose hallmarks are competence, fairness, and independence. “It is, indeed, encourage to note that, in addition to the implementation of this project, training programmes are being held for members of the Bench and their staff. This will augur well for the success of the Project,” he added The President was hopeful that all actors connected with the e-Justice system will strive for excellence, and demonstrate integrity in the use of the platform, so that anyone, judge, lawyer, or client, who uses the platform, will be confident that justice will always be delivered. “As we seek to move our country to a situation beyond aid, I urge all Ghanaians to be natural champions of a law-based state, whose establishments are solid enough to sanction effectively vigilantism, bank frauds, cyber frauds, sharp practice, illegal mining, identity thefts, stealing of public funds, bribery and corruption, criminal cartels, and criminal behaviour in general, including assault on and by law enforcement officers. The application of technology to the practice of law and the administration of justice will help facilitate the nation’s ability to reach these goals,” he said. He was confident that the e-Justice system will be one of the surest ways of diligently executing your task, and appealed to the actors to “make our justice delivery system one we can always be proud of.”