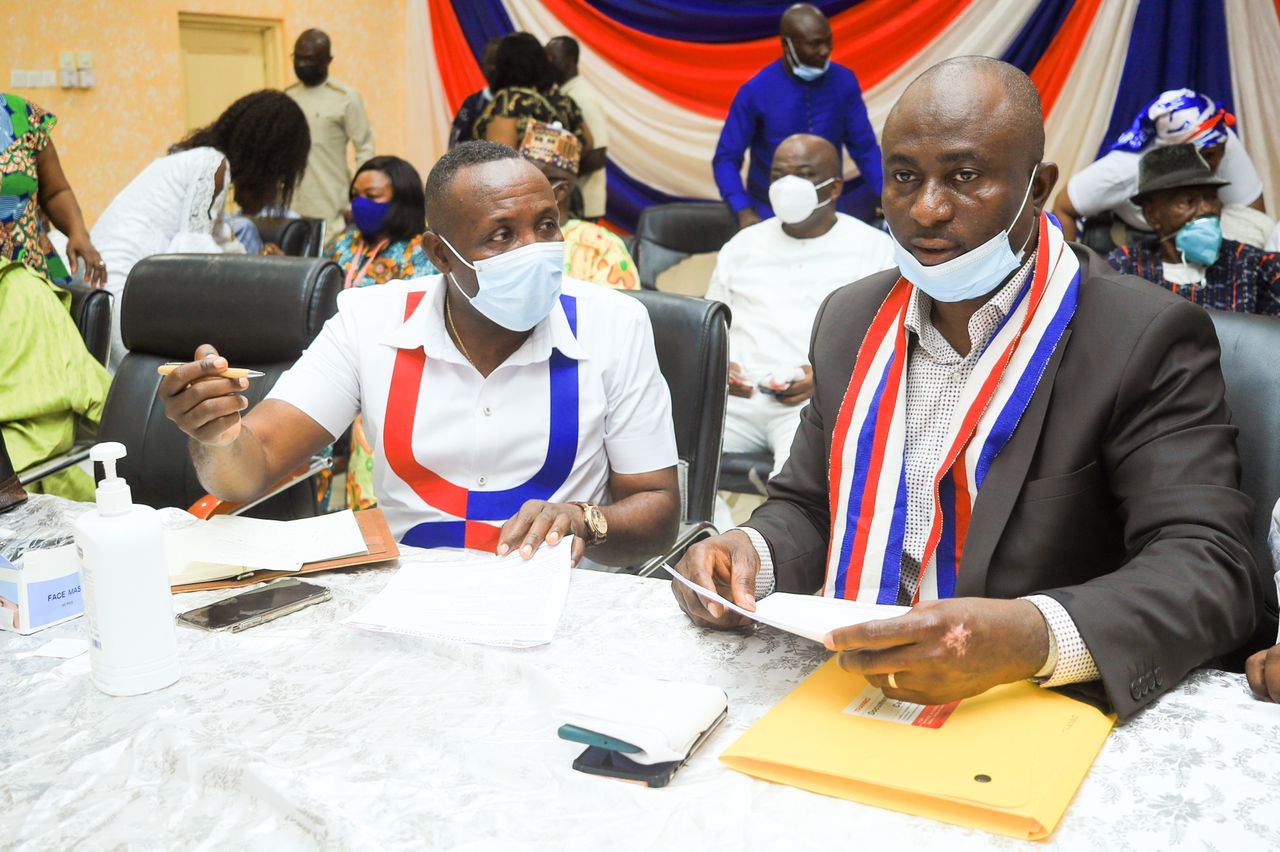 The NPP, on Sunday, October 3, 2021, held its Upper East Regional Annual Delegates Conference at the Bolgatanga GNAT Hall, in the regional capital. The conference, just like the Savannah and Upper West Regional Conferences held on October 1 and October 2 at Daboya and Wa respectively, was supervised by the national executives of the Party, led by the General Secretary, John Boadu.
Other national executives who are travelling with the General Secretary to supervise the various Regional Annual Delegates Conferences of the Party are the Deputy National Youth Organizer, Joseph Kwayaja; the National Youth Organizer, Nana Boakye Esq; the National 3rd Vice Chairman, Omari Wadie; the National Treasurer of the Party, Abankwa Yeboah; and the National 1st Vice Chairman, Rita Talata Asobayire.

The Upper East Regional Delegates Conference brought onboard all the constituency executives of the 15 constituencies in the region, constituency/regional council of elders and patrons as well as the Upper East regional executives of the Party, all of whom constitute the delegates to the regional conference. The conference was also graced by some former and current government appointees including the CEO for the Ghana National Food Buffer Stocks Company (Abdul Hannan Wahab), CEO for Northern Development Authority (Sumaila Abdul Rahaman), CEO for Regional Maritime Authority (Thomas Alonsi), CEO for Zongo Development Fund (Dr. Arafat Sulemana Abdulai).

Others were the Deputy CEO for YEA (Ibrahim Bashiru), Deputy CEO for the Free Zones Board (Ruth Atanga), CEO for MMIP (John Kurugu), Deputy CEO for Northern Development Authority (Patrick Seidu), Deputy Director, Diaspora Affairs, Office of the President (Nadia Adongo Musah), an executive officer of the GRA (Alhaji Farouk Hamza), the immediate past regional chairman (Mohammed Murtala), and a member of the Council of State, Sule Yirimia, among many others.

The Upper East Regional Chairman of the Party, Anthony Namoo, commenced the conference with a welcome address, which occasion he used to account for his stewardship of the party in the region. He also touched on some major projects undertaken by the Akufo-Addo government in the region, and expressed disappointment that these projects did not translate into significant votes for the party in the last elections. Equally, the Regional Minister, Hon. Stephen Yakubu, who also took turn to address the conference recounted the declining electoral figures of the Party in the region particularly in the 2020 general elections where the Party recorded one of its most unimpressive figures.

He said, the votes secured by the Party’s Presidential Candidate, declined from 35% in 2016 to 32.8% in 2020. Even more worrying, he observed, was the Party’s performance in the Parliamentary elections, where the Party lost all of its 3 Parliamentary Seats and managed to snatch a single seat from the NDC. On his part, H.E Alhaji Dr. Mahamudu Bawumia, who was represented by Hon Fred Oware, commended the Party executives for their hard work and illustrious sacrifices for the Party. He made significant financial contribution to the regional party and to each of the 15 constituencies in support of the conference.

Brief remarks were also taken from the Dean of the MMDCEs in the region, Hon. William Aduum, as well as from the only NPP Member of Parliament in the region, Hon. Abanga, the MP for Binduri, who doubles as the deputy minister for Works and Housing. They both implored the region to remain united in support of government and the party in order to enhance the party’s chances of breaking the 8 year governance cycle come 2024.

The General Secretary of the Party, John Boadu, who was the special guest of honour, took turn to address the conference where he spelt out the essence of the conference to include taking stock of the activities in the year under review, and to pass appropriate resolutions for consideration by the national annual delegates conference. He announced that the national delegates conference would be held from the 18th to 20th of December, 2021, in Kumasi. He then proceeded to talk about the ongoing reorganization exercise including membership registration which the party is undertaking and urged members to actively participate in the exercise.

John Boadu also touched on the need for the party to remain united and to support the government of President Akufo-Addo at all times in order to boost the party’s chances of breaking the 8. He reminded the good people of Upper East of some of the laudable developmental projects of the Akufo-Addo government in the region including the construction of the Pwalugu multi-purpose dam, which is the biggest infrastructure investment in northern Ghana since independence, as well as the Tano Water Supply Project and the ongoing construction of the Bolga-Bawku road, among several others, whereupon he appealed to them to always keep faith with the NPP to deliver.

According to the Party General Secretary, the NPP is the Party with the track-record of delivery, the Party of social interventions, and therefore, the only Party of choice to the Ghanaian people. To this end, he urged members of the Party to amplify the Party’s success stories, and work assiduously to actualize the “breaking the 8” project in order to protect the party’s legacies and consolidate its gains over the years. Whilst the Party is working hard to break the 8, John Boadu specially charged the people of Upper East Region with an additional responsibility of breaking the 4, after observing that the Party’s highest achievement in the region was in 2004, where the Party won as many as 4 parliamentary seats in the region.

After a short break, conference reconvened and considered the statement of accounts presented by the Regional Treasurer, Joseph Akanfaba, as well as a statement on the state of the party in the Upper East Region which was presented by the Regional Secretary, Ayambire Cletus. The two statements were approved and adopted by the Regional Conference. The Regional Chairman, Anthony Namoo then took turn to lead Conference to deliberate and adopt resolutions for onward submission to the National Annual Delegates Conference. After deliberations, the Upper East Regional Delegates Conference passed a resolution that no constituency or regional executive of the party shall support any prospective aspiring parliamentary candidate during internal primaries of the party.