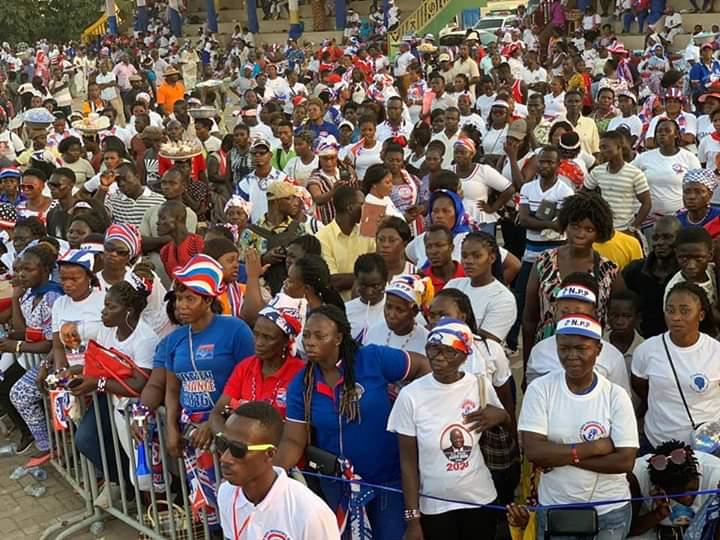 The New Patriotic Party (NPP) is saddened that H.E. the President of the Republic has been given no choice but to issue instructions for the withdrawal of the proposed amendments to Articles 243(1) and 55(3) of the 1992 Constitution, which would have seen the benefits of multiparty democracy extended to the local government level. We are, however, encouraged by the assurance last night that the President and his Government are not giving up in the important search for a consensus for as long as the NPP remains in office.

The President cited the unfortunate decision of the main opposition party, the National Democratic Congress (NDC), to break the consensus reached as having spoilt the national environment necessary for amending an entrenched clause in the Constitution. The President emphasized that he would only progress a process for an amendment of an entrenched clause if there was broad and clear national consensus.

The President is convinced that no Party, however strong its support and mobilisation efforts, ought to own solely an amendment of an entrenched clause, for which reason the President sought for and believed a strong consensus had been forged on the two issues of creating new regions and the introduction of multiparty participation in local governance from as far back as April 2017.

You would recall that, three months after being in office, President Akufo-Addo sought and got the support of his three predecessors, former Presidents John Jerry Rawlings, John Agyekum Kufuor and John Dramani Mahama for these constitutional amendments. This was a positive platform for beginning the process of building a broader national consensus.

Having worked together and achieving resounding success at creating the new regions and following the steps taken by the President in meeting all former Presidents and stakeholders on the amendments of Articles 243(1) and 55(3), we were all of the firm belief that the whole nation was again on course to achieving another resounding success at the referendum as had been agreed by all stakeholders, including the leadership of the NDC, until their sudden breach of faith regarding the consensus that all the political parties, CSOs, faith-based organizations and other key stakeholders on the referendum. The NDC’s U-turn is nothing else but an unpatriotic betrayal of the Ghanaian people. It is yet another clear sign of the lack of leadership at the very top of the main opposition party in Ghana.

The leader and 2020 Presidential Candidate of the NDC, John Dramani Mahama, has once again lived up to his own description of himself in his autobiography, where he described himself as an indecisive person. He indeed cannot make a decision and stick to it. John Mahama is not a leader because he does not stick to principles and cannot make up his mind even on what is good for his country.

He told President Akufo-Addo in the presence of Presidents Rawlings and Kufuor in April 2017 that he was in full support of the reforms that will introduce multiparty democracy to the local government system. Obviously, taking a cue from that tripartite presidential consensus, the NDC also came to the consensus table and stayed fully engaged both in Parliament and beyond and helped to improve the proposed amendments, especially Article 243(1).

In the regional referendum on the creation of six new regions on 27th December 2018, which took place before the NDC settled on John Mahama as their 2020 flagbearer, the NDC joined the NPP and others to openly campaign across the areas where the six new regions were to be created. Equally, on the December 17 referendum, the Majority and Minority in Parliament have had full cooperation, including productive give and take, on the two constitutional amendments involving Articles 243(1) and 55(3).

Indeed, as recently as 25th October 2019, the Majority and Minority Caucuses in Parliament had cemented a broad-based consensus on the concurrent amendment of both Articles 243(1) and 55(3). The two parties were now working on how to proceed on joint campaigns nationwide to mobilize, first the necessary 40% of the electorate to the ballot and then 75% of them to vote ‘Yes’ for the amendment of Article 55(3) on December 17.

What made the Leader of the NDC, Candidate John Mahama, dither? Can he explain why the sudden flip-flop? It can be nothing but yet another evidence of his weakness as a leader. It sends a clear message that John Dramani Mahama has still not changed and should not be expected to change. He was not trusted in 2016 and cannot be trusted in 2020. He is desperate for power and nothing else matters in his quest for that power. A leader who cannot take decisions that will transform the course of his developing nation is certainly not the kind of leader Ghana deserves. He lacks conviction and commitment.

As President from 2012, John Mahama failed to implement the recommendations of the 2010 Constitution Review Commission set up by President John Evans Atta Mills at the time that John Mahama was himself Vice President even though he promised to do so when he took over after the death of President Mills. As a former President, he promised to support the amendments that will allow MMDCES to be elected and for political office holders at the local government level to be elected under a multiparty system as it is common in democracies across the globe. But, as leader of the opposition party and with 12 months to the next general elections, he has chosen to put his own shortsighted understanding of his party interest above everything. Let me repeat, as presidential candidate, John Mahama, has forced his party to forego what is good for the nation for his own narrow-minded political calculations.

The question that must be asked and answered by the good people of Ghana. That, between the two main leaders, Nana Akufo-Addo and John Mahama; between the two main political parties, NPP and NDC, which of them can you trust to have the interest of Ghana at heart? Who puts Ghana first? Who is prepared to let go of the powers that the Constitution of the Republic grants to a President for the sake of improving how our country is governed? The answers are very clear to all. For the NDC who say that introducing multiparty contests at the local government level would make governance at that level tainted by conflict, we say to them that they are not true democrats. They also do not have trust in themselves as a Party.

This is because, currently, elections of both parliamentary and presidential candidates are contested fiercely in all the 30,000 polling stations across the country, where all other elections are also held. In fact, we believe rather than democratizing local government elections is what will improve the quality of politics at that level. It would tackle winner-takes-all. It would mean that for those at the grassroots, NPP and NDC would not only react at that level in contesting for votes but for cooperation in how their communities are governed. We see daily how MPs on both sides work together to pass bills, budgets, etc. They eat together, laugh together, work together and still argue healthily among themselves and take strong party lines where they have to without turning violent. This is what Akufo-Addo and the NPP want to spread to the ground.

For the NDC to say introducing an opportunity for political parties to work together at the local governance level would rather cause frictions are very hypocritical and shocking. Such a naked show of dishonesty, inconsistency, lack of integrity and deceit only affirms the wide perception that the NDC will, on any day, sacrifice the national interest on the altar of scoring cheap political points.

Their sudden U-turn and active campaign for a “NO” vote, barely four weeks to the proposed referendum, shows that the NDC has no good plans for Ghana. John Mahama and his party are not committed to the process. Well, President Akufo-Addo’s position is clear. He does not accept that political parties are divisive and we wholly associate with that view. For instance, the President refers to the past twenty-seven years of relative stability and growth under a multiparty constitutional democracy.

The President believes political parties can be a force for good, ensure responsibility and accountability and guarantee the fundamental right to free association. Indeed, if citizens in free association in political parties can be trusted to elect Presidents and MPs, it appears untenable that they cannot be trusted to elect local leaders under the same conditions. Significantly, the President assures that he will continue to work and seek consensus to enable many more Ghanaians to express themselves politically into the future. Nation-building thrives on a common agenda that puts the interest of the State ahead of political expediency.

The NPP believed and continues to believe that freeing political parties to operate at the local level has the potential to redirect national politics and make local governmental truly developmental, enhancing resources, including human and technical, for the provision of essential services for accelerated development. It is not a secret that the system is silently mutating to multi-party participation as aspirants to assemblies rely on the mobilization, logistical, technical and financial skills of parties to fight elections to the assemblies. Nonetheless, given the NDC’s unpredictable and indecisive leadership, the NPP supports the Presidents’s approach to withdrawing the bills whilst the conversation goes on. It is in the national interest that the conversation goes on.

H.E. President Akufo-Addo certainly deserves commendation for maintaining the need to secure true multi-party democratic practice in Ghana by agreeing, among other things, to devolve part of his appointive power back to the people in order to fully democratize the nation’s local governance regime and thus strengthen decentralization. The NPP hopes that sooner than later, a broad national consensus will be arrived at for these amendments to be carried through for the love of God and country.