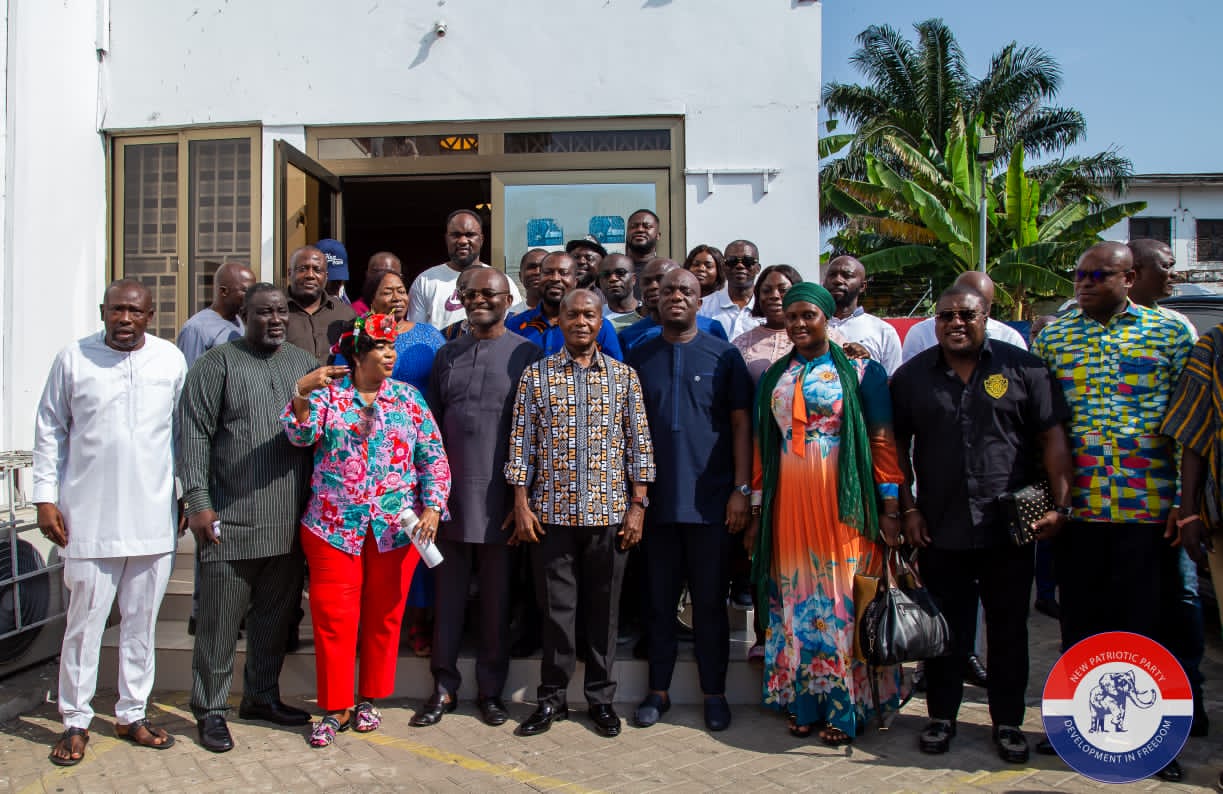 The New Patriotic Party’s policy of Party-Government Engagement has gained prominence with one government official after the other interacting with the national leadership and staff of the Party headquarters almost on a weekly basis.

On Tuesday, December 20, 2022, Hon. Kennedy Ohene Agyapong, the Board Chairman of the Ghana Gas Company Limited and Member of Parliament for the Assin Central Constituency, took his turn on these engagements with his visit to the Party headquarters.

As he warmly welcomed him, the National Chairman, extended the Party’s appreciation to the Member of Parliament for the latter’s endorsement of the initiative that is aimed at unifying the front of the Party for victory in the 2024 general elections. He also commended him for his diverse contributions to the Party over the years.

The Chairman’s remarks could not be concluded without recounting the government officials and appointees who had, following the introduction of the policy, made a similar move.

Making his remarks, the General Secretary of the NPP spoke favourably of the Assin Central Member of Parliament’s visit, and indicated, it was the first first time a Member of Parliament without a ministerial position had visited the Party headquarters since the implementation of the Party-Government Engagements initiative.

In his brief address, the General Secretary had great hopes that other Members of Parliament would emulate the move by Hon. Kennedy Ohene Agyapong. He also seized the opportunity to urge Hon. Kennedy Agyapong and all other party stakeholders to be moderate in their public pronouncements to guarantee the unity of the Party before, during, and after the parliamentary and presidential primaries.

Accompanied by a group of his supporters and fans, Hon. Kennedy Agyapong, as he is affectionately called, noted that he was paying a courtesy call on the leadership of the NPP to pledge his readiness to help them and the entire Party to accomplish the enormous responsibility of retaining power in 2024. He extolled the leadership of the Party for the policy that is bridging the gap between party functionaries and government appointees.

His address also featured his contributions to the party since its formation in 1992. This, some National Officers of the party testified to, and confirmed his continuous financial and logistical support to the party in general, and specifically to the Youth, Women and Nasara Wings of the party.

Hon. Kennedy Agyapong announced that as part of his individual contributions to the Party, he had started the distribution of footballs, jerseys, sewing machines, and other useful items to some Constituency Women Organisers and the Chairpersons of some constituencies. In addition, he had commenced the distribution of rice and other items to all poling station executives of the Party as a form of support for the Christmas festivities.

Briefing the National Executives on his role as Chairman of the Governing Board of the Ghana Gas Company Limited, Hon. Kennedy Agyapong disclosed, amongst others, his contributions towards the expeditious completion of some projects of the company that had delayed.

The national leadership of the party welcomed Hon. Kennedy Agyapong’s pledge to raise funds to support the party in the conduct of the impending parliamentary and presidential primaries.

In his concluding remarks, the National Chairman, on behalf of the party leadership, was, again, thankful to Hon. Kennedy Agyapong for his visit and continuous generosity to the party.