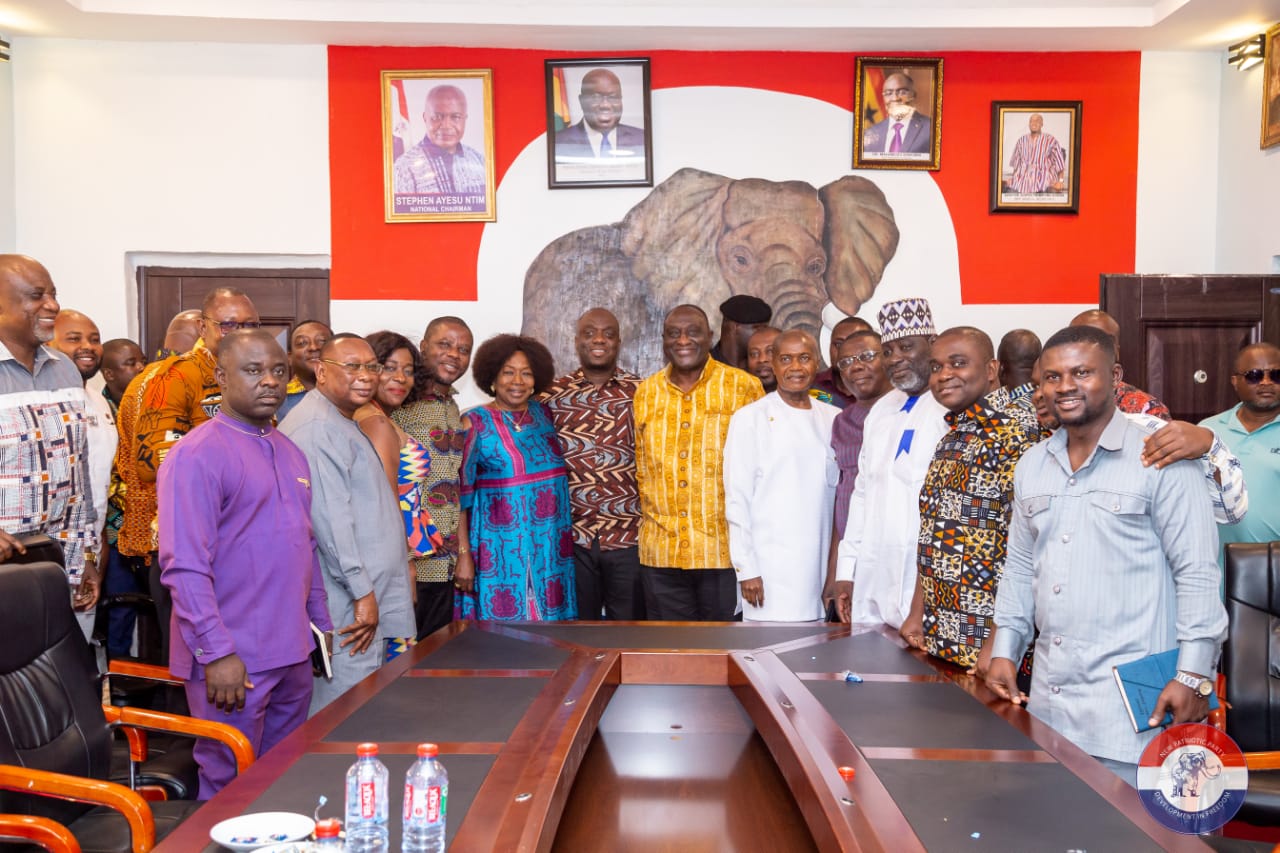 Mr. John Alan Kwadwo Kyerematen, Minister for Trade and Industry, on Friday, December 9, 2022, interacted with the national officers and staff at the headquarters of the ruling New Patriotic Party (NPP) as part of a working visit.

The Party-government engagement series, Chairman Ntim said, is one of the several initiatives introduced by the current national executives to achieve the aforementioned objective. He noted that other initiatives and interventions such as “Time With Patrons”, “Time With Ambassadors”, “Time With CEOs, regular meetings with the Party’s parliamentary group among others, are all geared towards enhancing the working relationship between Party functionaries and government appointees.

Responding to the warm reception accorded him, Mr. Kyerematen briefed the leadership of the party on some key interventions rolled out by the Ministry of Trade and Industry since the year 2017, when he was appointed as minister. He disclosed that his Ministry has pursued two major objectives aimed at minimising unemployment and strengthening the Ghanaian economy. He further noted that towards achieving these objectives, the Ministry of Trade and Industry has developed a comprehensive program to fully industrialise Ghana as practiced by developed economies globally. He asserted that it is not for nothing that the most powerful and developed countries worldwide are also the most industrialised.

Mr. Kyerematen cited specifically amongst others, the revival of existing distressed companies with stimulus packages; the introduction of the One District One Factory (1D1F) initiative, diversification of the economy with the introduction of ten new economic anchors, increasing Ghana’s export through the opportunity offered by the Africa Continental Free Trade Agreement (AfCTA), creation of specialised industrial parks and economic zones to accommodate manufacturing and processing companies, and the creation of an enabling environment for local businesses to thrive as some interventions by the Ministry of Trade and Industry since 2017.

Mr. Kyerematen also noted that industrialisation should be prioritised if Ghana is to address its perennial economic challenges of unemployment, high import, and inflation. According to him, the various interventions introduced by the Ministry of Trade and Industry provide avenues for the rich and poor, young and aged, as well as citizens and foreigners to actively participate in growing the economy of the country. He urged all and sundry to be part of the plan to industrialise Ghana.

On his part, the General Secretary also lauded Mr. Kyerematen for his visit and the numerous interventions by his Ministry. He commended him highly for his cooperation when the party wrote a letter to him regarding a health walk that was organized by some group alleging to be his supporters, in violation of the party’s Code of Conduct for pre-parliamentary and presidential primaries. Lawyer Kodua Frimpong assured that the leadership of the party will remain neutral, fair, and transparent during the party’s presidential and parliamentary primaries in 2023.

In response to the General Secretary’s remarks that the Party is in the process of printing albums for its upcoming primaries, Mr. Kyerematen pledged to support the exercise by paying for the entire cost of printing the albums. He requested the leadership of the Party to, indeed, assert their impartiality and provide a level playing field for all prospective candidates in the interest of the Party.