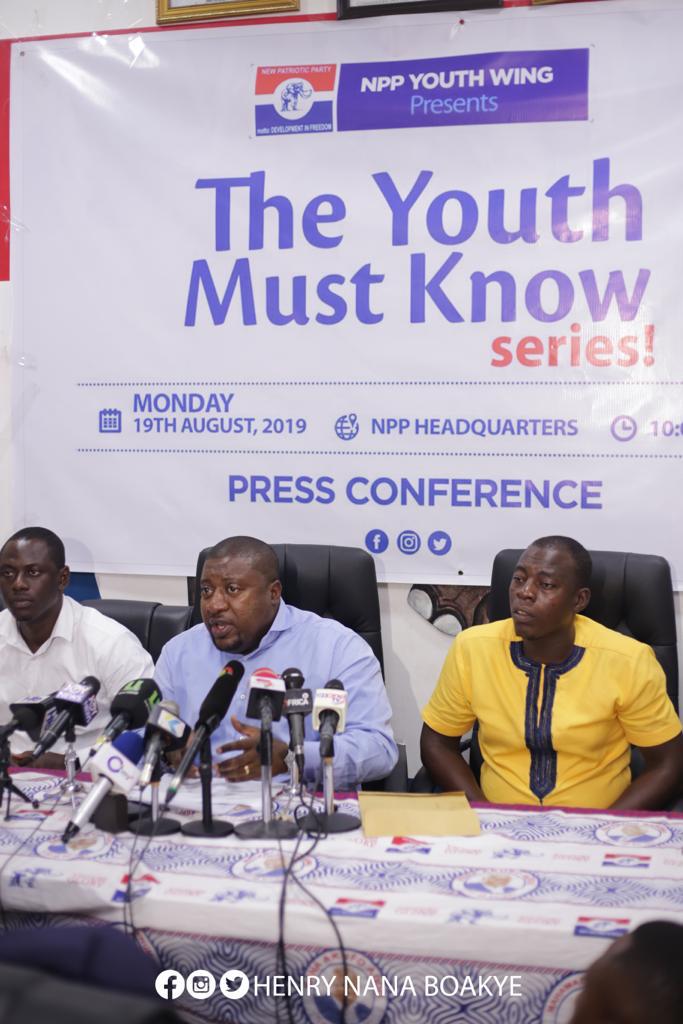 Good morning, friends in the media fraternity and the Ghanaian youth.
The National Youth Wing of the New Patriotic Party is pleased to have you here upon this short notice. This media engagement forms part of activities being carried out by the National Youth Wing of the NPP on the wheels of the Youth Must Know series, initiated a few weeks ago.
We have invited you here to update you on issues pertaining to the implementation of government’s flagship program, Free SHS and the recent dishonest utterances made by former President Mahama and same being intimated subsequently by the NDC as a party.

The Deception in Mahama’s Comment on Free SHS
—————————————————-
Reference to former President John Dramani Mahama’s dishonest U-turn on the Free SHS Policy, the National Youth Wing of the New Patriotic Party (NPP) wishes to bring clarity to the matter, lay the facts bare, and expose the mischief and contempt therein.

It would be recalled that Mr. Mahama speaking at the 27th Annual Residential Delegate Congress organized by the Ghana National Union of Technical University Students in Kumasi stated that “Free SHS is here to stay”, an assertion that contradicts the moldy entrenched hostility exhibited by the NDC against the Free SHS Policy since 2008.
For the avoidance of doubt and in the spirit of making it known to the youth of Ghana, the NPP youth wing, without a shred of equivocation, asserts that the seeming endorsement given to Free SHS policy by former president Mahama is driven by ill-faith, deception and opportunism borne out of former president Mahama and the NDC’s innate tendencies to subtly associate themselves with good things and to benefit from same.

Evidence abounds that former president Mahama and the NDC have opposed and worked negatively to obstruct, destruct and hobble the implementation of the Free SHS policy since 2008.

The Youth Wing of the NPP can boldly state that former President Mahama and the NDC if given another opportunity to lead this nation, will deliberately collapse the free SHS policy and re-direct the funds into dubious contracts that will directly put money into their pockets than benefit the millions of Ghanaians.

• Former President Mahama on November 23, 2012, told the people of Okere in the Eastern Region that “Free SHS will collapse the education system of Ghana”.

• Former President Mahama at UCC in 2016 said, ”The Free Senior High School by the NPP is a political gimmick

• Former President Mahama at the NDC’s Tarkwa unity walk strongly rejected the Free SHS policy stating that it is unwise to implement it.

• Former President Mahama again on October 1, 2018, reiterated his aversion to Free SHS stating that it will undergo a review and hinted on the possibility of the policy being scrapped because to him it is unthinkable to spend 2 billion Ghana cedis in free SHS and that it is seriously constricting government’s budget.

• Hajia Joyce Zeinabu, then National Women Organizer of the NDC in 2016, November 20, had this to say, ”Free SHS will breed teenage pregnancies”

• The General Secretary of the NDC, Mr. Johnson Asiedu Nketiah is on record to have said on October 1, 2018, that Free SHS is shambolic and that it will have to be scrapped.

• Adam Mutawakilu, NDC MP for Damango said ”Blame the mysterious deaths at KUMACA to overcrowding as a result of Free SHS”.

• Felix Kwakye Ofosu on May 14, 2018, had this warning for the government ”You can’t use oil money to fund Free SHS”

Constitutional Provision
————————————————
It does appear that deliberately, former president Mahama, over time, has been breaking his neck to hoodwink Ghanaians with the notion that Free SHS is a constitutionally mandated policy and not the idea of H.E. Nana Addo Dankwah Akufo-Addo for which the NPP must be commended for implementing same.

The fallacy and intellectual poverty inherent in this line of argument does not only make Mr. Mahama look ridiculous but also demonstrates that the NDC as a party has been very wasteful and extremely disappointing in their performance when they were in power and for that matter should never be allowed, for even a day, to run this country.

It’s been 28 years since the promulgation of the 1992 constitution out of which the NDC has had 16 years to govern this country. It is therefore humiliating that the NDC, albeit the more years they have had to rule this country than any other party, has failed woefully to implement the supposedly constitutionally mandated Free SHS policy. Is it not interesting that it has taken President Akufo-Addo, less than one year to do what the NDC couldn’t do in 16 years.

These two narratives point to one conclusion, that the NDC are bad managers of the economy and lack the requisite skills set and competence to accelerate sustainable economic growth and development whilst the NPP exudes the competence to put on a spurt massive life-saving and transformational pro-poor policies for enhanced living standards and shared prosperity.

Again, the NDC has sought to bastardize the Double Track System due to their lack of understanding of how it operates. The government introduced the double-track system following the commencement of the Free Senior High School policy as a temporal measure to contain the overwhelming number of students amidst limited infrastructure.

Statistics from the Ministry of Education indicate that in 2017 and 2018 alone, about 270,000 Ghanaian Children who but for the timely intervention of Free SHS would have been thrown out unto the streets, have been enrolled into the various senior high schools across the country.

What the Government sought to do with the Double Track System was to bring closure to the age-long narrative where pupils who qualify and are willing to access Senior High School are denied because of limited space.
It is important to underscore that the Double Track System has not only allowed for the maximum use of infrastructure but has reduced class size and increased contact hours.

This arrangement, in no doubt, will lead to an increase in the quality of our SHS education, culminating into the churning out of an army of smart and intelligent young SHS graduates to help in the building of a great country.

It is on this premise that the astute and respected Ghanaian educationist, entrepreneur and Founder of Ashesi University, Mr. Patrick Awuah commended the government stating that “the double-track system is a cleaver idea” and that the “idea has the potential of not only helping Ghana really solve the problem of access but become a model for the rest of the continent”.

However, as characteristic of former president Mahama and the NDC, they have been persistent in their dishonest conduct of criticizing the Double Track System without providing alternative ideas. The open ridicule and deliberate distortions of the facts by the NDC relative to the Double Track System only reaffirm the belief of many Ghanaians that the NDC lacks the requisite knowledge and competence to contribute to nation-building.

To prove their worth, former president Mahama and the NDC should, with alacrity, disclose to Ghanaians their alternative comprehensive and detailed plan for Free SHS. The irresponsible name-calling and careless use of semantics like “review” as their action plan only expose the poverty in their understanding of the policy and uncertainty about what they intend to do about the policy.

For the former President Mahama to say in his speech he will assemble all stakeholders to provide him with solutions on the Free SHS policy demonstrate clearly he does not have any meaningful contribution to the free SHS policy, but he is only desperate to associate himself with the success chocked by the policy.

The Youth wing is happy to report to the youth of Ghana that the well calculated attempt by the government to expand access to senior high schools and eliminate the Double Track system is yielding positive results as new projects have reached final stages of completion.

At least some 804 facilities which started in 2017 under the Senior High School Intervention Projects (SHSIPs) are expected to be ready for use by the start of the 2019/2020 academic year.

The projects consist of the construction of new classroom, administration and dormitory blocks, as well as assembly halls, science laboratories and toilet facilities.
This massive infrastructure expansion in existing SHSs delivered in a short period is unprecedented.

You would recall that the NDC said it will take 20 years to put up such massive infrastructure projects to permit the implementation of the Free SHS policy.

It is therefore refreshing to underscore that, within 3 years President Akufo-Addo has achieved what would have taken Mr. Mahama and the NDC 20 years to realize.

In 2018, a total of 8,000 additional Teachers were employed to take care of the additional number of students resulting from the successful implementation of the Free SHS Policy.
This recruitment is independent of the regular recruitments that have been done by government since 2017 that have resulted in the posting of over 59,000 newly recruited teachers.

The NDC has no shame that by virtue of Free SHS, several thousands of young people who were unemployed for years due to the bad economic management of the incompetent and corrupt Mahama government are now gainfully employed.

Until the assumption office by HE Nana Addo Dankwah Akufo-Addo, pupils in SHS were billed an amount of money as Teacher Motivation fee. This arrangement largely brought undue financial burden to parents and much inconveniences to students who defaulted in payment as they were made to leave class and sometimes examination halls.

We have picked up intelligence about a grand scheme being orchestrated by the NDC to run down the Free SHS Policy and other smart educational policies being implemented by the Ministry of Education and Ghana Education Service (GES).

We are reliably informed that in the coming days, a group of retired educationists and members of the academia, as well as former leaders of Teacher Unions with allegiance to the NDC, would be part of the sinister game, which is to be coordinated by some known opposition politicians.
The general public is admonished to be on the lookout for such unpatriotic and callous members of the society and as they have done in time past, treat their acts with the utmost contempt. We entreat Ghanaians to remain steadfast in their support to the government on the many policies being implemented.

A critical analysis of the utterances of former President Mahama and other NDC functionaries relative to the Free SHS policy and double track system gives an obvious conclusion that they have been confused and bereft of ideas since they were in charge of government for 8 years to date.
Mr. Mahama’s sudden U-turn on the Free SHS policy is very deceptive and shrouded in treachery. We are informed by reliable sources close to the NDC that Mr. Mahama had to be compelled to backtrack on his decade hostilities against the policy when the NDC realized that:

Ghanaians, especially the Youth can and should never trust former president Mahama to sustain the implementation of the Free SHS policy. If not for anything, we are aware that Mr. Mahama and the NDC:

It is instructive to note that the Nana Addo led NPP Government do not need the incompetent former president Mahama to remind us that Free SHS is working and has come to stay.

The massive endorsement from religious and traditional leaders and the testimonies about the Free SHS policy from parents and well-meaning Ghanaians, provide enough grounds for Ghanaians to vote for the NPP to prevent the NDC from destroying these transformative and progressive policies in future.

The youth of Ghana is grateful to the President, HE Nana Addo Dankwah Akufo-Addo and the Minister of Education, Hon. Dr. Mathew Opoku Prempeh and his team for their visionary leadership that in September 2019, will see over 1.2 million Ghanaians access second cycle education, free of charge.
Thank you