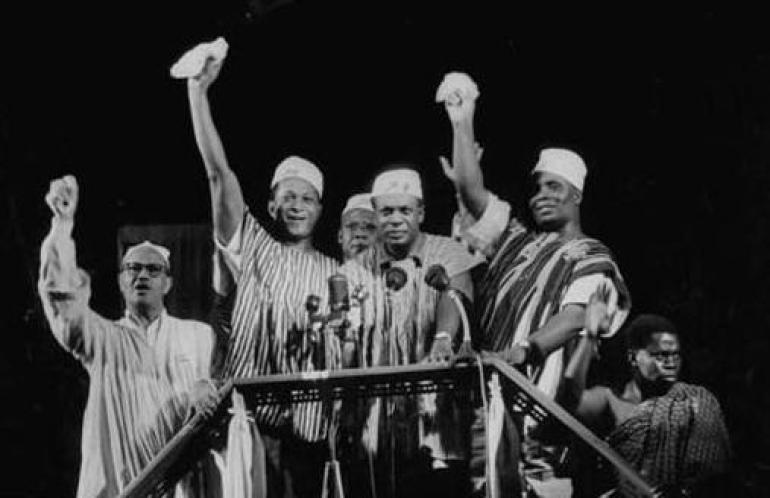 I find as not only disconcerting but also preposterous claims by some political actors to the effect that our country, Ghana, was founded by just one man. This claim, rather astonishingly, is being pushed by persons affiliated with the NDC political tradition, and indeed, when they were in office, they, through an Executive Instrument, declared Nkrumah’s birthday, the FOUNDER’S DAY and proceeded to make it a Public Holiday to be observed each year much to the chagrin of the Ghanaian people particularly persons who know the history of Ghana’s independence struggle. In any case, what is the NDC’s principled position when it comes to the treatment of persons who have toiled to found an entity? What is their record in the treatment of their own party founder?

We all do know that the NDC has reduced the significance of their founder, former President Rawlings to ground zero. They tell us he is a nobody. They tell us he is too weak to command any influence in the party. They tell us he is a barking dog whom they decided to cage in perpetual oblivion. And indeed, as confirmed by Prof Kwabena Ahwoi, the NDC deliberately recruited “babies with sharp teeth” whom they often unleash to attack the party founder. That is how they are treating the founder of their party. That is how they are treating the man, whose sacrifices, sweat and blood gave birth to the political entity, called NDC.

This is in spite of the fact that there is no doubt about his ‘founder status’ because the NDC’s constitution recognizes him as such. Nobody can love the NDC more than Rawlings, seeing how he “killed himself” to give birth to the party and nurtured it. Yet, the NDC of today, has tried every possible means to obliterate Rawlings’ records in the party and in the country. That is how treacherous some members of the party have become. That is how legendary their ingratitude has reached. That is how horrendous and repugnant they are treating the founder of their party, who is still alive and kicking.

Yet, they are all over the place, celebrating the founder of another political party, Dr. Kwame Nkrumah of the CPP, who died several decades ago. They say, till date, Nkrumah remains the greatest Ghanaian and indeed the greatest African that ever lived on this planet. They say Nkrumah was infallible. They say he, alone, fought and got us Independence from the British. So, they say, he is the SOLE FOUNDER of Ghana. They have associated everything positive in Ghana and Africa to Nkrumah. Perhaps, the only thing they haven’t said about Nkrumah is to liken him to God, because they fear thunder would strike them dead if you did that.

But are all these things being said about Nkrumah really true? Have we been told only one side of Ghana’s history, with deliberate distortions and exaggerations relative to Nkrumah’s role in our independence struggle in order to project him far ahead of his compatriots? My simple answer to these questions is an emphatic YES and I would proceed to adduce some further and better particulars to vindicate my position in this raging debate on whether or not Ghana was founded by one man. In doing that however, I wish to put the spotlight on Nkrumah himself and the legendary JB Danquah and trace their respective contributions and legacies.

THE STORY OF JB DANQUAH

To start with, JB Danquah, was, rightly so, described as the doyen of Gold Coast politics by the famous Watson Commission of Inquiry into the 1948 riots. Unfortunately, beyond that, very little has been said about him in our history books even though, his contribution to our independence struggle, is almost unrivaled. In case you didn’t know, JB Danquah was one of the persons that discovered Dr. Kwame Nkrumah after he [J.B Danquah] and his colleagues had laid a solid foundation in relation to the struggle for independence including the formation of the almighty UGCC on 4th August 1947, the first political party in the country, which set the stage for our takeoff.

In other words, Nkrumah came into the picture at the time some 80 to 85% of the job had already been done. Again, it was JB Danquah that suggested to Nkrumah to rename the then Gold Coast as Ghana at the time of independence. Also, JB Danquah played a leading role in the establishment of the nation’s premier University, UG. These facts are all incontrovertibly documented. JB Danquah is also the founder of the West Africa Times, the first daily newspaper in Ghana. What more can one offer to his country? What you just read is less than 9% of J.B. Danquah’s achievements for Ghana. I cannot finish telling the enviable ‘Danquah story’ because I will need not less than 100,000 pages. But, suffice it to say with heavy heart that, his story ended rather sadly.

This illustrious son of our land and arguably, the greatest Ghanaian that ever lived [JB Danquah], was virtually “murdered”; by who? Dr. Kwame Nkrumah, the very man whom, he [JB Danquah] discovered and nurtured. This was what happened. When President Nkrumah perceived that JB Danquah’s rising popularity was becoming a threat to his continuous stay in office, he ordered for his arrest and locked him in jail for life against his fundamental human rights. He wasn’t taken to court for trial because Nkrumah himself knew that Danquah did nothing wrong to warrant such capricious use of State power.

Nkrumah ensured that Danquah died and rot in jail. He didn’t also allow a State burial to be observed in honour of this great Statesman of all-time until after his [Nkrumah’s] overthrow. This is certainly the apogee of insensitivity, treachery and ingratitude exhibited by Nkrumah. Google JB Danquah’s letter to Nkrumah from prison, read it and you would shed tears as though you lost a loved one in a deadly car crash.

NKRUMAH AND THE UGCC

In the cause of the independence struggle which was spearheaded by J.B. Danquah’s UGCC, Nkrumah at some point, had issues with the leadership of the party because he felt that the quest for independence needed so much urgency and must be immediate (now) rather than in the shorted possible time, which was then the belief of the UGCC leadership. In view of this little disagreement, Nkrumah broke away from the UGCC and formed his own party, the CPP.

Now, watch this, after all the talk about wanting Independence NOW rather than in the shortest possible time, it took the nation (Gold Coast) more than 8 years to realize this independence. So I ask, if somebody told you, he would give you something NOW and it took the person 8 years before doing that, would you say the person has fulfilled his promise? Wouldn’t that rather qualify more as ‘shortest possible time’ instead of NOW? Well, I leave that for you to judge.

UNMASKING THE ILLS OF NKRUMAH

Upon attaining independence, the British government gave Ghana, several millions of pounds sterling as a reparation package to help in the country’s rebuilding efforts. The money was significant enough to have turned the fortunes of this country. But that didn’t happen because it wasn’t used for its intended purpose. Nkrumah chose to use a chunk of that money to pursue his agenda of Pan-Africanism, so that, he would lead the entire Continent. He wanted to be President of Africa. And so, he used our money to put up a number of developmental structures and huge investments in other African countries to help his bid. That’s how Nkrumah became very popular on the Continent of Africa and not because of any extraordinary thing he did. In other words, he used our money to pursue his parochial and egoistic agenda.

Indications are that, if Nkrumah had invested all of that money in Ghana, our country would have been perhaps more developed than South Africa. And as if he hasn’t done enough disservice to this country already, President Nkrumah also wanted to rule Ghana as President for life. So in 1964, he changed the country’s Constitution and made Ghana a one party State (with his CPP). He also passed a law to ban people from criticizing his style of leadership. If you criticized Nkrumah, you would be arrested, imprisoned without trial and if you were not lucky, you would be beaten to pulp and killed. He wasn’t accountable to anybody and nobody could challenge his authority in the country. Nkrumah was more than a tyrant and a notorious dictator, having succeeded in cowing everybody into absolute submission. Democracy was alien to him and the culture of silence was his pride.

I am not surprised that his political party, the CPP, “died” the very day he died. Today, Nkrumah’s number one legacy, the almighty CPP, is struggling to make 1% of total valid votes in general elections. Whereas J.B. Danquah’s political tradition, which is now called, NPP, consistently obtains more than 48% votes valid votes in every general election in this fourth republic. In the 2016 elections for instance, the NPP secured more than 53% (precisely, 53.8%) of the votes, whereas Nkrumah’s CPP managed to poll less than 1% (precisely 0.2%). Such a disgraceful performance! That is how unpopular anything Nkrumah has become in present day Ghana.

And you want me to celebrate him as the sole founder of Ghana? Your gods must really be crazy. In any case, our history doesn’t suggest that Ghana has a sole founder but founders or if you like, founding fathers. The NDC government’s decision to institute a founder’s day (in honour of Nkrumah alone) rather than founders’ day, is surely a blot on the conscience of our historians. It was purely a political decision meant to spite the admirers of JB Danquah and other founding fathers of Ghana and that is grossly unfair to their memories.

Well, I would, on any day, choose JB Danquah over Nkrumah and that is me. I also think that Nkrumah has been celebrated enough in this country, and the fact that Nkrumah’s birthday (i.e. 21st September) has been maintained as a commemorative day to show among other things that, Nkrumah was the President at the time of independence, is enough. It is certainly worth commending H.E. President Akufo-Addo and his government for taking steps to put the history of Ghana’s Independence struggle in proper perspective and acknowledging the contribution of the legendary JB Danquah and indeed all our founding fathers and founding mothers to the struggle for independence and nationhood. Yes! It is Founders’ Day and NOT Founder’s Day.