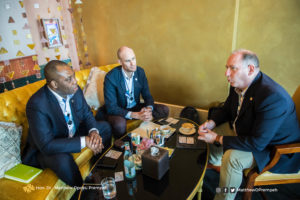 The Minister of Education, Dr. Matthew Opoku Prempeh has pledged his support to the Duke of Edinburgh International Awards, also known as the head of state awards in Ghana at a recent meeting with top officials from the scheme.

At the just ended Global Education and Skills Forum (GESF) held in Dubai, the minister interacted with John May, Secretary-General of Duke of Edinburgh and Sam Williams, Head of Operations, about the role of the awards scheme in molding young people into functional citizens, to the benefit of themselves, their families and the nation as a whole.

“I was in the Red Cross myself as a young boy, and the experiences I gathered from there played a key role in me becoming a general surgeon. I have no doubt that when young people engage themselves in programs like this, they are bound to learn a lot and they gain experiences they cannot get in the classroom,” Dr. Prempeh said to the duo.

Since 1967, the Head of State Awards has provided a social structure for the development of young Ghanaians between the ages of 14 to 25. Through voluntarism, experiential learning and patriotism, the awards scheme has managed to equip over 180,000 Ghanaian youth with employable and soft skills for life. The best performing participants are then awarded in a special event hosted by the president of Ghana at the end of the annual program.

Although the mandate of overseeing the Head of State Awards lies with the Ministry of Youth and Sports, the Minister of Education promised to lend his support to the team to see to the facilitation of the remarkable awards program.