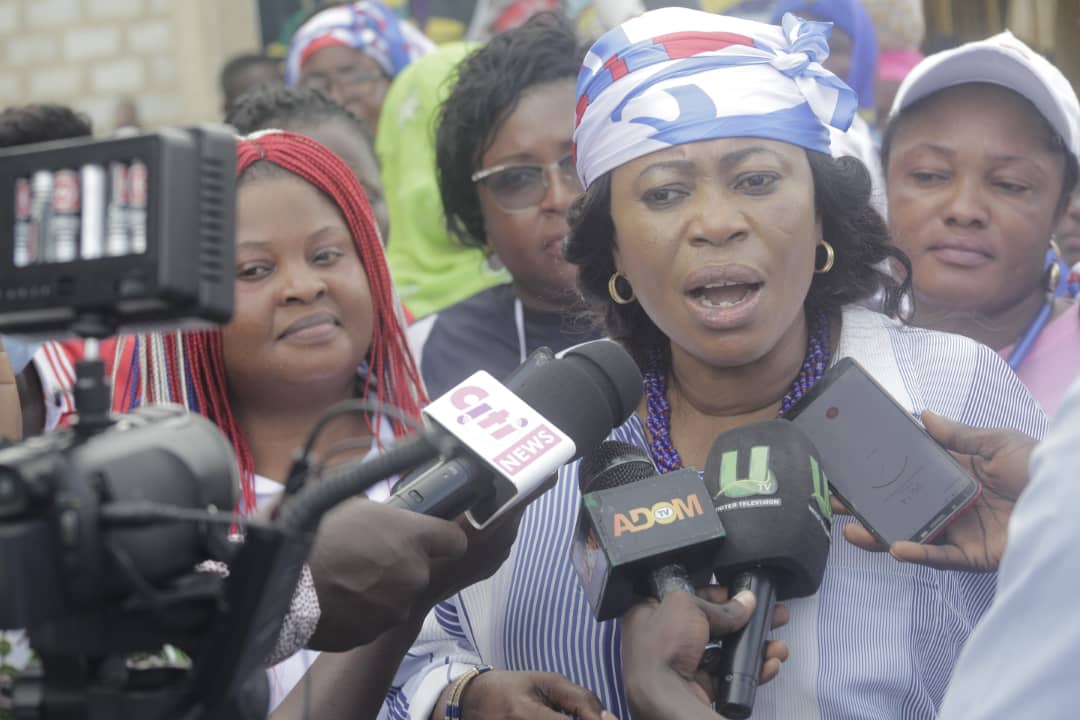 Her visitation forms part of an intensive commencement of campaign duties by the NPP to secure another victory in the December 2020 parliamentary and presidential elections.
She was welcomed by Hon. Mavis Hawa Koomson, Hon. Michael Yaw Essuman Mensah –MCE, Chairman Abu Sadat, Constituency executives, polling station executives and the entire Constituency Women’s Wing, supporters and sympathizers of the party within Kasoa Municipality.

Her first point of call was meeting with Chiefs and Queen mothers at Kasoa Ofankor, Akweley and Zongo at their respective palaces.

Madam Kate Gyamfua in her address to the Chiefs and Queen Mothers touted the NPP government as the people’s government because the NPP initiated and implemented various social intervention programs such as the Free SHS, School Feeding, student loans for tertiary students among others. She asked for their prayer and support.

Madam Kate Gyamfua later in the afternoon session had and engagement and a fruitful interaction with the Queen Mother’s within the constituency at Obaatanpa Radio premises.

Afterwards the team drove through the principal streets of the constituency as the young and old rushed to catch a glimpse with hundreds of people waving and cheering.

Finally she moved to the popular Kasoa old market and charged them to campaign massively to retain Nana Akuffo-Addo and Hon. Mavis Hawa koomson in order to ensure the continuity of Free SHS and all the other government policies the people of Kasoa and Ghanaians in general enjoy today. She also encouraged the Constituency polling station executives and volunteer groups to work hard and continue with effective house to house campaign to help NPP win massively come December 7th . The crowd gathered was overwhelming and the market women response and reaction gave an assurance for 4more4Nana and 4More4Hawa